​Welcome to the website for the Office of Priestly Vocations of the Diocese of Grand Rapids, MI. This year twenty-five men from our diocese will be in seminary formation programs in preparation for ordination, seven of whom are new to formation. Thirteen of these men are at St. John Vianney College Seminary and twelve are at USML/Mundelein Seminary. 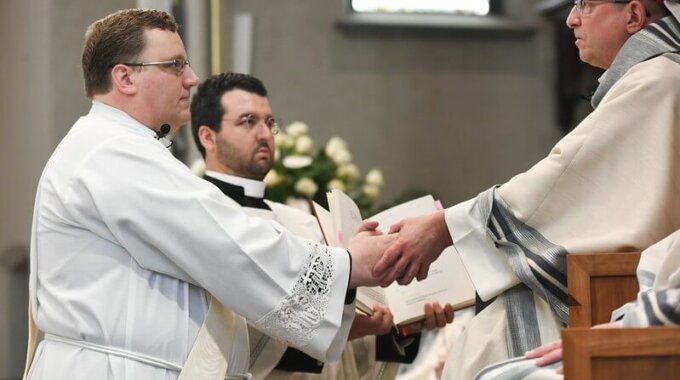 
I never set out to fall in love with Christ through his Church and sacraments. The path into the Catholic Church was, for me, paved with a series of “yeses” – but with each step along the way, my assent was tempered with conditions.“OK, God, I’ll attend this one Mass, but I’m only going so that I can evangelize this friend of mine, witnessing to a ‘true saving faith in Christ.’”

“OK, God, I’ll attend Mass each week, but only because I’m new in town and haven’t found a church I like.”

“OK, God, I’ll attend RCIA, but only so that I can learn more about Catholicism – I’m not going to become Catholic.” Even on the night I was confirmed during the Easter Vigil of 2012, as I stood in front of the entire parish affirming that “I believe and profess all that the Catholic Church teaches, believes and proclaims to be revealed by God,” I had some reservations:

“OK, God, I’ll become Catholic, but I’m not going to become one of those Catholic fanatics.”

Based on the trajectory I had taken into the Church, I should have known how things would turn out. I should have known, but I had not yet come to understand that Christ and his Church are one – you cannot separate them. To love Christ is to love his Church, the body of Christ. Through the Church and its sacraments, we encounter Christ and become participants in the very life and love that exist between the Father, the Son and the Holy Spirit. It wasn’t until after I became Catholic that I discovered what those whom I had so hastily labeled as “Catholic fanatics” already knew.

I didn’t expect the depth of encounter I have experienced with daily Mass, receiving Christ in the Eucharist, and being ever so gradually transformed into his likeness, learning to love as he loves and forgive as he forgives. I’ve been astounded by the tangibility of his embrace in the sacrament of reconciliation, overwhelmed by his love, mercy and forgiveness, penetrating my wounded heart. And I’ve been enthralled by the intimacy of prayer, my will being conformed to the will of the Father as I have grown in becoming increasingly dependent upon him. My life has been profoundly transformed, and I believe the Lord desires I give of myself completely so others may similarly encounter him, fall in love with him and be transformed by him through the sacraments.

I never expected to become a priest … until I learned what it is a priest does. A priest declares with his very life the surpassing value of knowing Christ Jesus as Lord, joyfully suffering the loss of all things for Christ’s sake, counting everything as refuse in order to gain Christ and be found in him. Like the man who finds a treasure hidden in a field, the priest joyfully sells all he has in order to buy the field. But he’s not content in keeping it to himself. The priest spends his life showing this treasure off and giving it away, therein discovering the truth of its abundance and inestimable worth. Caught up in the wonder of selfless love – in a paradox of self-giving – the priest finds his life as he gives his own away. He is not worried about himself, for he knows that it is only in relationship with Christ and his body that all of his needs are satisfied.

No, I never set out to fall in love with Christ through his Church and his sacraments, but I did. And I thank God that I did. In doing so I have discovered the life I was always intended to live – the life of a priest: living in love with Christ; losing my life for his sake; sharing in his death but also sharing in his life so that it is no longer I who live but Christ who lives in me.

Father David Jameson was ordained to the priesthood for the Catholic Diocese of Grand Rapids on June 4, 2022.

“You are going to be one beloved priest”.

Copyright 2019 - All Rights Reserved | Website by revel.
Back To Top